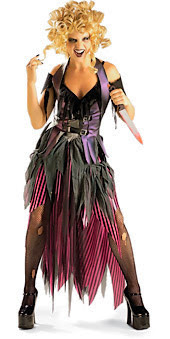 Looks like the Three Bears didn't let Ghouldilocks skip away innocently into the forest. Also available on Amazon. 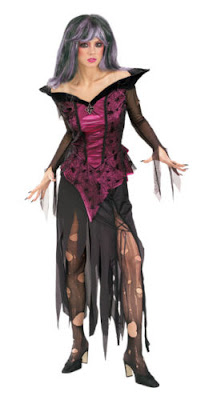 "Creeping Beauty" must have been lying in wait in her tower bedchamber for a very, very, very long time. 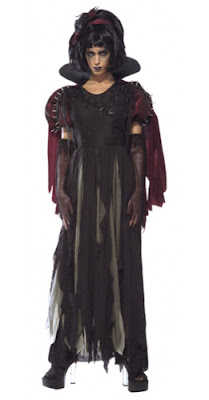 "Snow Fright" is part of Rubies' "Unhappily Ever After" costume line. I guess she's from the heretofore unprinted version of the story where Snow White doesn't wake up after the prince kisses her in her glass coffin.. Also available on Amazon. 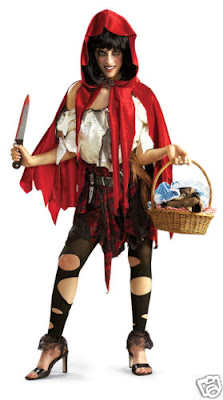 Little Dead Red Riding Hood includes the dress, belt and cape, but not the ripped stockings. I'm sure you have some already laying around! This is also from the "Unhappily Ever After" costume series. Also sold on Amazon. 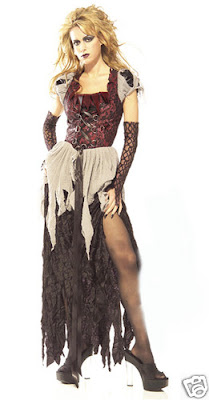 "Sinderella" must not have gotten back from the ball before midnight. Her gown is ripped, and you can provide your own tousled-hair matted nasty zombie wig. Also sold on Amazon.

I'm not sure what fairytale Cruelzella is supposed to be from. She wears a tattered red velvet gown. 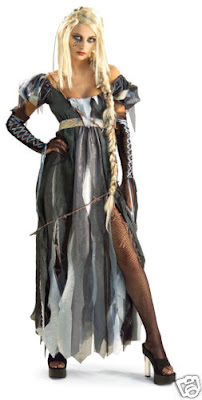 "Ripunzel" shows what happened to Rapunzel after she fell from the witch's tower to her death. The costume doesn't come with the wig, but that's ok, it's not really long enough anyway. Also sold on Amazon.